This show is a late addition to the Three Links calendar! Doosu/Descender front man Casey Hess will perform solo first, then it's Mike Graff with Mike Daane and Duncan Black afterwards. Should be an intimate evening in the old neighborhood on Thursday night. 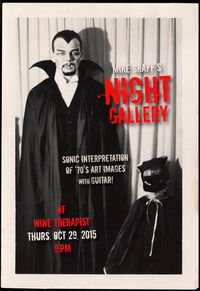 Friends, every few years I do a special Halloween themed solo show where I interpret art images created by my dad in the early '70's with the sound of electric guitar. I call it "NIGHT GALLERY". This year's show will happen on Thursday night, October 29th at The Wine Therapist in Lakewood. Starting at 9PM, I'll do my best to coax the spirits through the wood and paint, to join us in the room. Afterwards we'll just be digging the sounds of early '70's glitter rock and dark wave classics on the P. A. It's just a few nights before Halloween, so it's a perfect time to don a fake mustache or a frightening wig. As always, there's no cover at Wine Therapist. But there will be an opportunity to purchase prints of some of dad's art images. So come get your Halloween on a few nights early!

Friends, I must say it's felt great lately to be able to step out, play a bit of guitar, and be part of the community in Deep Ellum again. Our friend Robert Garza has invited Mike Daane, Duncan Black and me to be part of the bill next Friday evening May 1, along with his band MAD MEXICANS over at THE CURTAIN CLUB. The evening starts at 9:00pm with THE GLEN YOUNG EXPERIMENT, featuring former Tripping Daisy / Polyphonic Spree drummer Brian Wakeland. At 10:00 it's PALOMINO, featuring former Scary Cherry & The Bang Bangs drummer Alan Ayo. At 11:00 MAD MEXICANS will be delivering their latino fusion hip hop metal Cinco De Mayo party. After midnight, I'll be doing my spacey instrumental versions of C.o.E. and HOTM material. So if you're in the old neighborhood late next Friday, come by and say hello. Perhaps mean ol' Chad will take a break from his knob twiddling to join us onstage for a number.